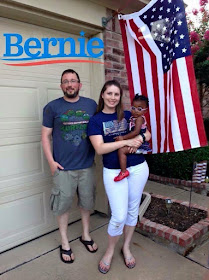 At least it looks adopted, not a cuck-product.

Food for thought: who's the bigger pussy, the average Bernie bro, or the average evangelicuck?

Even more food: is there any difference?

They have no children there. Just pretend.

Hey, no need to "insult" and degrade folks here in photo.

It's easy for an "anonymous attack" online.

But your *REAL NAME* behind your online comments.

Also, it's very immature for folks to attack the "young black girl" in photo: she may simply have been adopted by this young white couple; not enough details to know the whole story here; it's just people's "self-serving" interpretations/projections/judgments.

I hope and pray the best for the man, woman and young girl for things to be aligned in their lives in *GOD'S WILL*.

I don't want the guy to be a "cuck" to his wife and marriage and just want things to work out for *EVERYBODY*.

Yeah, one "photo" don't tell the whole story y'all.

The story behind it Jed, is that she’d rather adopt an African orphan than have a child with him. That’s virtue signaling and beta disgust.

Meanwhile, soyboy hubby let’s his wife walk over him.

Shut up, you evil practitioner of Churchianity.

"Shut up, you evil practitioner of Churchianity.

She's pretty hot with child bearing hips. There might be a problem though, with fertility, despite appearances. Let's not rush to judgement, o my brothers.

Without context, we have two adults holding a baby of a different race. They're smiling.

We can't even tell if the two adults are together.

And "Bernie" could've been added as an afterthought. I am actually skeptical a Bernie supporter would have two patriotic displays (of course, they could be at a neighbor's house, which is why context helps).

I thought Jed was being sarcastic at first, but then I realized he was actually serious. LOL. Just another example of a superreligious person with a giant stick up his ass.

"Just another example of a superreligious person with a giant stick up his ass."

Jed, if we don't want America to turn into a sh*thole, one important thing is to stop adopting the type of people who turn their countries into sh*tholes.

Thanks for the best blog.it was very useful for me.keep sharing such ideas in the future as well. Thanks for giving me the useful information. I think I need it!

Wait, so that's your comeback, Jed? Jesus, you hardcore religious types really are a bunch of squares. Lmao.

Do you mind if I quote a few of your articles as long as I provide credit and sources back to your site? My blog site is in the very same niche as yours and my visitors would definitely benefit from some of the information you present here. Please let me know if this okay with you. Thanks a lot! game tester at home

If she dropped 40 lbs, she'd be quite bangable.